Most of our listeners aren’t on Live365. Why do we persist there? One reason is historical; there was a time when it was our only option due to the dynamics of Internet Broadcasting at the time. Another is that Live365 is an audience unto itself. Live365 attracts listeners we don’t attract elsewhere.

Live365 is a pain in the butt. It forces us to accept ads. It forces use to comply with rigid requirements that aren’t compatible with our (lack of) “format”.

As a result, our Live365 stream sounds different. It sounds very much like Radio InfoWeb would sound on a commercial FM station. Which has been the case in the past, and is likely to occur again in the future. In fact, if you’d like your local FM station to carry our programming all the time, or, more likely, some of the time (in the past Radio InfoWeb was used to fill up time the station couldn’t), have them contact us!

On Live365, Radio InfoWeb sounds a bit softer and not quite as sonically cohesive, both because of those ads, and due to the pressure the music industry exerts on Live365. Live365 presents strong disincentives to play music that’s not licensed by ASCAP, BMI, SESAC, RIAA, etc.

The Live365 stream is lower-bandwidth at 64K, so it’s lower fidelity but more compatible with the variety of devices Live365 supports, and the Internet connections they’re likely to have.

An finally, if none of the other reasons for our stream have touched you yet… it’s an alternative. If you don’t like what’s on the main stream, you can always tune into Live365 for something a bit different.

PS – Those commercials benefit us this much: ZERO — Live365 claims it helps support THEM — but we all know this simply means Live365 is totally in the thrall of “big music”… and funneling the money (and the mother lode of personal and music listening info) thataway.

The InfoWeb Broadcasting Center is undergoing some construction this week (11/12 – 11/16) that could cause some brief power interruptions. This may cause occasional fallbacks to backup programming, and on the shoutcast feed that is also redistributed thru tunein and the iPhone app there may be occasional silence (because not all components in the chain can figure out there’s a problem).

This week we started streaming live on Live365 at 64k during the day hours. This has to be manually supervised in order to comply with Live365’s requirements. The stream is the same content as the 123k Shoutcast stream. If you’ve got bandwidth problems, try the (lower bandwidth) Live365 feed.

There are some exciting things on the way, in terms of Radio InfoWeb becoming available through some FM broadcast outlets. We can’t say much except they’re all West of the Mississippi.  Due to the time difference from NYC, it looks like we will be creating a new stream called “Radio InfoWeb West” or something like that. It will be essentially the same InfoWeb programming, with additional content like news, weather, and the like, tailored to the different time zone(s).

These changes mean we’ll be mixing it up with our various feeds, so stay tuned!

As always, we’re interested in hearing from you! Email us if you get a chance. We read and reply to your email as quickly as possible, usually in less than a day. The new iPhone app has one-button access to sending us email. For everyone else, the address is radio at infoweb dot net.

The Beaches dot the landscape. But then, they’ve always done that.

However, as I drove to the SpaceZepplin terminal, I was musing at how things have changed. For example, I was listening to Radio InfoWeb as I drove using the Tunein app on my iPhone. Such a scenario was unimaginable when the program I was listening to, recorded in 1997, was made. But at Radio InfoWeb, we’ve always imagined the unimaginable: making radio intended for interstellar space travellers. We’re almost there, kids.

Then came the promo for The Fourth Tower of Inverness, the upcoming daily radio serial (or is that cereal?) that is designed to strengthen your consciousness and brain for the difficult time ahead. The narrator of The Fourth Tower is Dave Herman. That took me back. Dave had been knocking around NYC area radio. He got his big break in 1970, about the time I was DJ’ing at a pirate radio station out on Long Island. He took ABC’s “Love Network” live on WABC-FM, which rapidly became the infamous WPLJ. The mission was to make FreeForm radio commercially successful. It even worked, for a short while. Here at Radio InfoWeb, we’re still carrying on that mission, and haven’t given up yet… no not at all.

Enter Dave, our new announcer. Dave is serious… in a kind of unhinged way. You hear him every day, every time you turn on the radio or TV. He’s a “golden throat”. Now his unhingedness is unleashed on your psychedlic brains. But I digress.

Until recently, we had only scraps of reel-to-reel tape with bits and pieces of the original Fourth Tower series. Although you can now purchase the “unabridged” version on CD,  it’s not in the daily serial format for radio. It kind of loses something in the process, because every episode is a cliffhanger. But now, you can hear Dave Herman narrate in all his glory from those days, fresh off his hot, if short, gig with the ABC malcreation that, sadly, did not live long… degenerating into “top hits rock” in the usual format.

The TuneIn app held up through the torturously varying communications landscape caused by the degrading cellular network; courtesty Hurricane Sandy. TuneIn transcodes the Radio InfoWeb stream into something more digestible by iPhones (as well as iPads and iTampons) than the 128K stream that works better over WiFi and hardwired connections. Thus, it’s better, so far as I know (I haven’t tried it yet) than the upcoming Radio InfoWeb app, a sneak preview of which is shown below… 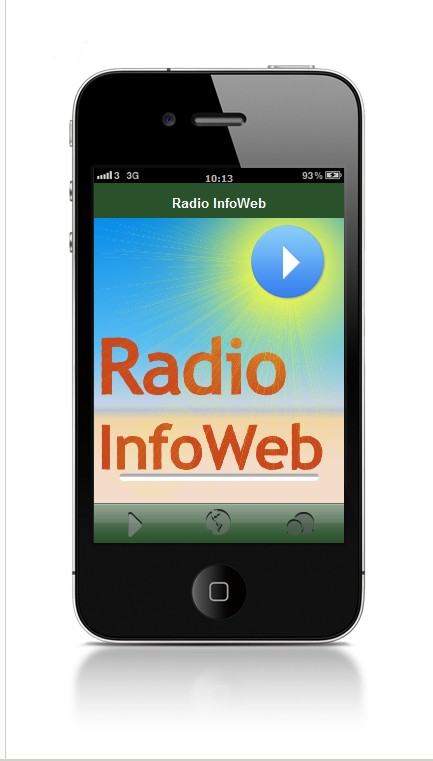